Here in this guide, we will find out what are the best laptops for Elden Ring.

Elden Ring, a popular action role-playing game, focuses on exploration and combat. To provide the greatest possible gaming experience and remain competitive, Elden Ring must run at the maximum possible frame rate without any visual stuttering, frame dropping, or other issues. Always, when it comes to video games, the higher the number of frames per second (fps) the PC can output to the display, the better.

It’s crucial for the gameplay to have flawless real-time rendering at the maximum frame rate possible. The more frames per second you see, the more quickly you can respond. Unfortunately, no matter how skillful you are, you’ll never get it perfect as long as terrible visuals and low frame rates interfere with the gameplay.

To help you decide which is the best laptop worth your money, we scoured the market and came up with a shortlist of five. Within each price range, we hand-picked a machine that meets the official Elden Ring system requirements and can thus run Elden Ring smoothly with high framerates.

We also cover the best PCs for Elden Ring and if you are interested in desktop gaming, feel free to take a look. 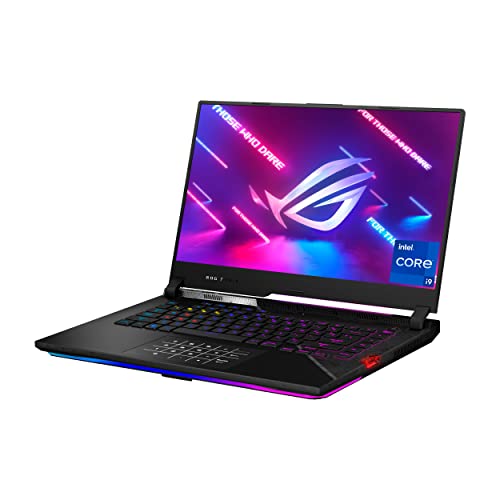 Note: Keep in mind that laptop CPUs and GPUs are around 20% weaker than the ones in gaming PC build.

What computer parts to consider when searching for the best laptop for Elden Ring?

The most important computer parts for a decent gaming laptop are undoubtedly the graphics card and processor. However, there is more to take into consideration.

The minimum and recommended GPUs are quite interesting, particularly for Nvidia since the GTX 1060 and 1070 are so similar within their product range, but there is a significant difference in VRAM.

The key difference between Nvidia GeForce GTX and Nvidia GeForce RTX is that GTX cards employ the shared Turing architecture for high performance. RTX cards, on the other hand, include RT and Tensor cores and real-time Ray Tracing rendering techniques for more realistic gameplay.

There is no ray-tracing support at the time of writing, but the developer will add it with a special patch later on.

Thankfully, nothing is too daunting about Elden Ring’s CPU requirements. The game requires an Intel i5-8400 CPU (or Ryzen 3 3300X), which are great processors; however, they are years old at this point, and any modern CPU would be able to run the game flawlessly.

Whether running Elden Ring on AMD Ryzen or Intel Core processor doesn’t really matter, as neither will make much difference if they are within the same processor power range. The most important thing is that the CPU must be within the system requirements.

Elden Ring is quite RAM-hungry as it requires at least 12GB to run, with 16GB being recommended for optimum performance.

Resolution: It’s simple. The more resolution display has, the more you see. For best gaming experience the recommended resolution is FullHD or 1920 x 1080 pixels. I wouldn’t advise you to go below that. They are still laptops on the market with standard 19:9 with only 1366 x 768 px, but I urge you to avoid them as it would be a shame to have a decent gaming laptop with a crappy display.

Refresh rate: Today’s dedicated graphics cards are capable of real-time rendering way above 60 fps. To see things more fluently (especially for fast camera movement) and to actually benefit from high frames per second, a refresh rate of a display must be as high as possible. For the smoothest gameplay, conventional 60 Hz (which may be interpreted as 60 fps) displays are not enough, and today we can find laptops with displays capable of up to 300 Hz. At least 120 Hz is recommended.

What is a good frame per second for Elden Ring?

The lowest frame rate at which a game may still be enjoyed is usually set at 30 FPS. However, 60 FPS+ is generally the ideal target since the game feels more fluid and responsive, and you benefit a lot in competitive games. Unfortunately, as with its previous game, Sekiro: Shadows Die Twice, FromSoftware appears to have enforced a frame rate cap of 60 frames per second.

Elden Ring requires at least 60GB of free space. We recommend a 512GB SSD drive, especially for those who want some other game installed on your system, and 256GB may be too small.

And please forget the word “HDD.” 😉

Will the cooling aspect of the laptop affect your playing Elden Ring?

Yes, it will. To run Elden Ring smoothly, you want your CPU and GPU, both at maximum clock speed. Suppose reaching critical temperatures, the CPU and GPU dynamically under-clock to protect the system from damage due to excessive heat. And when the CPU has to underclock, it will affect the frame rates of a game.

This is why gaming laptops must have an effective cooling system to prevent the throttling, resulting in fps drop.

What is the best Elden Ring laptop?

When buying a new gaming laptop, it very much depends also on your budget. We compiled a list of the best laptops for Elden Ring that are the best in each price range. Sorted by the price, all the laptops listed here are very well capable of running Elden Ring smoothly to enjoy the game to the fullest. They all feature the newest RTX GPUs to support the future implementation of Ray Tracing in Elden Ring as well.

The Asus TUF Dash F15 is a great budget gaming laptop with solid hardware, including a Core i7 11th generation CPU and RTX 3050 Ti GPU, making it an excellent laptop for casual gamers and those on a tight budget.

You’ll be hard-pressed to find a better deal than the Asus TUF Dash F15 if you want an RTX 30-Series GPU laptop but don’t want to spend a lot. Even in the most demanding games, we found that this low-cost system performed as if it was in a considerably higher price range.

There were no signs of overheating during our tests, and we consistently got 60 frames per second or higher on this RTX 3050 Ti gaming laptop.

The MSI Stealth 15M is the latest in a long series of super-portable best gaming laptop prospects. This machine manages to cram some first-rate hardware into a slim chassis while still delivering excellent gaming performance.

The Nvidia GeForce RTX 3060 graphics card delivers buttery smooth performance across a wide variety of games on a 144Hz display.

With that much power under the tiny hood, cooling and battery life are sure to suffer a bit, and the chassis of this machine may get quite hot while gaming.

MSI Stealth 15M is a good option for a gaming laptop that can fit in a bag and carry around easily. Please note that it doesn’t have an ethernet port. However, featuring WiFi 6, you won’t suffer any unwanted latency. Or you can always use USB->Ethernet dongle.

It features a near top-of-the-line CPU Intel Core i9 12900H, with 14 total cores and 20 threads and a maxed-out frequency of 5 GHz. Packed with a dedicated Nvidia RTX 3070 Ti GPU that supports Dynamic Boost, it gets you around a 12% performance boost in supported games and applications.

The Asus ROG Strix Scar 15 is a compact full-size laptop that excels in performance and gaming and is one of the better choices in its class.

Verdict: What are the best laptops for Elden Ring

So to answer question, what is the best laptops for Elden Ring. It pretty much all depends on the budget you are willing to spend on a new gaming laptop to run Elden Ring. A good starting point would be meeting at least the recommended system requirements. However, minimum requirements are based on what developers define as playable at the lowest graphic settings values. In contrast, the recommended requirements are what is needed to run a game with decent or highest graphical settings with a high enough frame rate for the best gaming experience.

If your budget is limited, stick to our recommended laptop for Elden Ring. Otherwise, you may aim for higher-tiered pricier gaming laptops, so you can crank up graphics settings to the max and still enjoy smooth gameplay with the highest frames per second possible.